This microbe safari is risky business. We are an hour’s bush-whacking off the trail, in the Yellowstone back-country, amid a field of geothermal pools. Most of the pools are at or near the boiling point. Some are alkaline, while others are as sour and corrosive as stomach acid. There was danger in nearly every step. The whole district is shot through with potholes, each one potentially deadly. Some are gurgle with boiling water. Some belch steam. To put a foot in one could mean vicious burns. To break the thin crust of silica and fall through would be deadly. (Someone died not far from here a month ago, straying off the boardwalk unguided. Fell into a pool. There were no remains to recover.) The place also smells like farts. 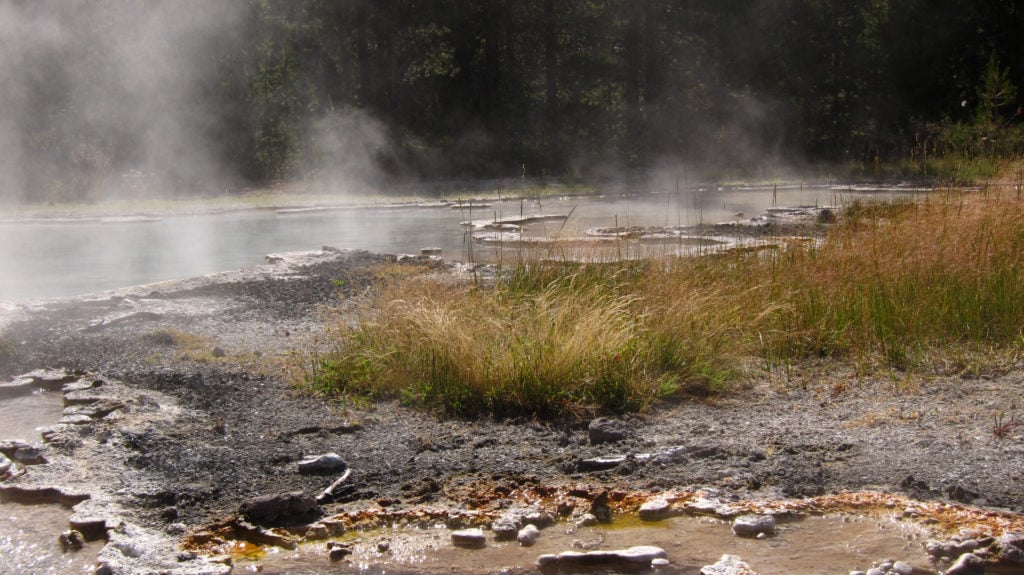 Note the dangerous shelf on the far side. Approaching from that side, the ground appears solid right up to the thin, brittle edge.

After nearly twenty years of working around geothermal springs, Professor Everett Shock has developed a remarkable eye for reading these treacherous landscapes. Holes a few inches wide could be twenty or more feet deep and indicate thin ground. A particular kind of crusty formation on one side of a pool indicates danger, although similar crusts can be perfectly safe. One rule of thumb is to keep on the grass. Typically, as one approaches a pool, the soil becomes too harsh and hot to support macroscopic plants; a small, barren rock “beach” surrounds the pool. However, in some instances, grass may grow near the water while a barren but solid patch nearby is more secure. Shock can tell the difference. Soon we had all fallen into the habit of carefully checking each step before we took it. While moving, we kept our eyes down, scanning a radius of two yards or so around us for hazards. As we moved through the landscape, the ground burbled, glugged, steamed, spewed, belched, and boiled. It looked like a world out of Star Trek. Traversing it felt like crossing a minefield.

The pay-off for a microbe-hunter here, though, is huge. In this remote bit of the park, an area the size of a couple of football fields, one can find, Shock says, “a little bit of everything.” “This pool is acid,” he said, pointing as we gazed over the hot spring field, “that one right next to it is basic. One is spitting out iron, another is bright blue.” Some are as clear and inviting as a swimming pool, others are turbid and tinted, others are “mudpots,” boiling mud-puddles meters deep. One student, Melody, is doing her thesis on them. Melody judges the value of a site by its mudpots. 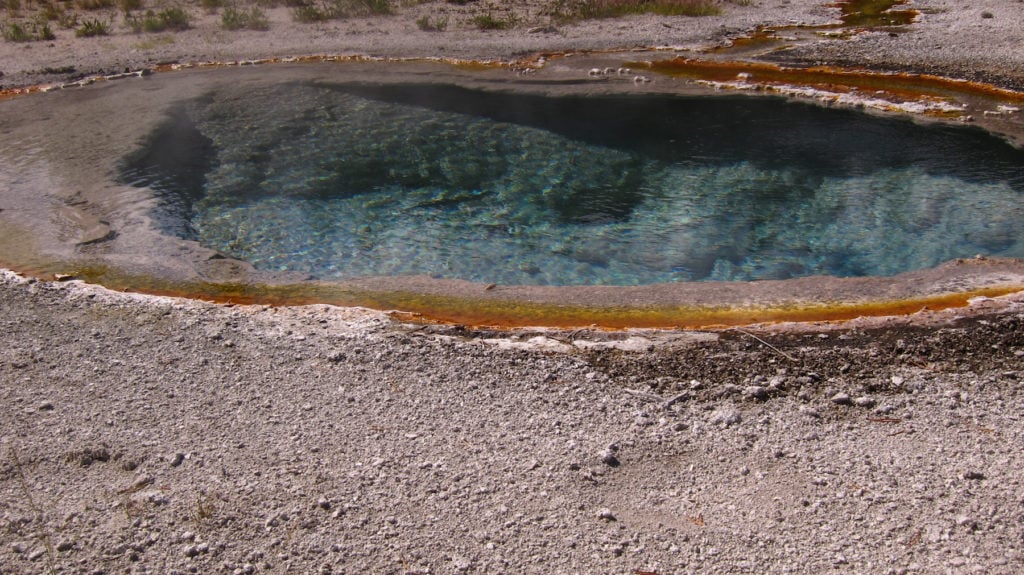 “When we started,” Shock said, “we gave the pools simple names. Pool 1, pool 2, pool 3. But we found we couldn’t keep track of which was which. So we started giving them stupid names.” By “stupid” he means silly. Some are actually quite clever. A good name is mnemonic and funny–either witty or vulgar. Today we were sampling seven pools: Jackhammer boils violently and is surrounded by loose rocks the size of footballs. Bat Pool is vaguely bat-shaped. As we approached it, it shot up a burst of gas and water. “Hello, Bat Pool,” Shock said. “It’s nice to see you too.” St. Blucia is a milky blue. Spitting Croissant is crescent-shaped and harbors great colonies of mucousy microbes. Over the years, the pH and conductivity in Spitting Croissant have fluctuated wildly. Evolutionary theory would suggest that different species would flourish under the different conditions; physiology, however, offers the possibility that Spitting Croissant microbes are selected to tolerate a wide range of conditions. One of the students is working on finding an answer. The landscape here changes year to year. Last year, Dirty Donut was in fact donut-shaped. This year, we find the water has breached one of the walls, creating a wide outflow. Corner Thing I imagine being named at the end of a long day. Finally, lording over the other pools on the hill above, is the majestic Empress Pool.

The technician, Vince—6’4”, about 220, decked out in a flannel shirt, aviator glasses, and a broad-brim hat with a jaunty long feather in the hatband—is integral to the operation. He carries the heaviest pack, keeps track of logistics, and watches over the group. Shock calls him “Uncle Vince.” Uncle Vince also had the painstaking job of collecting dissolved gases in the water samples. As the dry, thin mountain air warmed, sleeves rolled up, shirts came unbuttoned. Uncle Vince revealed a “Led Zeppelin Tour 1977” t-shirt. When I commented on it, Shock began singing “Whole Lotta Love” in a Robert Plant falsetto, playing air guitar as he puttered around, checking on the students’ progress. “Oohh baby, I ain’t foolin’/Gonna send you, back for schoolin’/Waaaay down inside…”

The sampling itself is simple enough, but it’s a delicate task. Many pools are undercut, leaving thin, treacherous ledges around part or all of the rim. Shock ensures that the students collect from a safe distance; the scoops have six-foot handles and can be extended to twelve feet. Usually one side of a pool is determined to be the sturdiest. Then the researchers have to work out a safe path across the minefield between camp and the pool. “Do you know the way to Jackhammer?” a student may ask, though the pool is in sight, as far away as a ten-year-old can throw a stone. Frequently, the answer is “Ask Everett.”

Shock’s students and technician, men and women alike dressed in variations of Early Indiana Jones, set up a field lab in a grassy spot with a bit of shade. Each member of the team got right to work on his or her designated task. One measured temperature, pH, and conductivity. Another collected water samples, which would be divvied up for later analysis: sulfur, hydrogen, various minerals, trace metals, organic and inorganic carbon, and small organic acids such as formate and acetate, which can be “bio-signatures”—characteristic products of life. Another student collected samples of the sediment in each pool. In the muck live microbes that don’t need oxygen or food. Sometimes the students shared samples. “Is there any leftover Spitting Croissant water?” is a question that makes sense here.

A typical biology lab is like a factory. The students are lined up at benches organized into “bays,” long tables jutting out from the walls with two student stations on each side. They work independently, bantering and listening to music as they carry out their often-repetitious tasks and shuttle between their bench and the instruments around the lab. Out in the field, the students arrayed themselves into a lumpy version of the lab, tucking themselves into niches, shady ones if possible, and often with bushes or scruffy trees demarcating the boundaries. They bantered as they carried out their repetitive tasks, while some picked their way carefully out to the next pool to collect their sample. Jokes and teasing were lobbed over the bushes like playful water balloons. The group killed about an hour seeing if they could name a mythical animal for each letter of the alphabet. Impressively, they could.

Shock presided over the operation like an orchestra conductor, keeping track of and checking in on each project, cueing the entrances and exits as necessary and then glancing out over the minefield and grabbing his walkie-talkie to warn a student of a hazard and suggest a safer route. Oddly, the group settles in a kind of normalcy, everyone at his or her task, the day ticking away. It’s just like being in the lab, except if you stray by a couple of steps you could literally melt on your way to getting a drink of water.