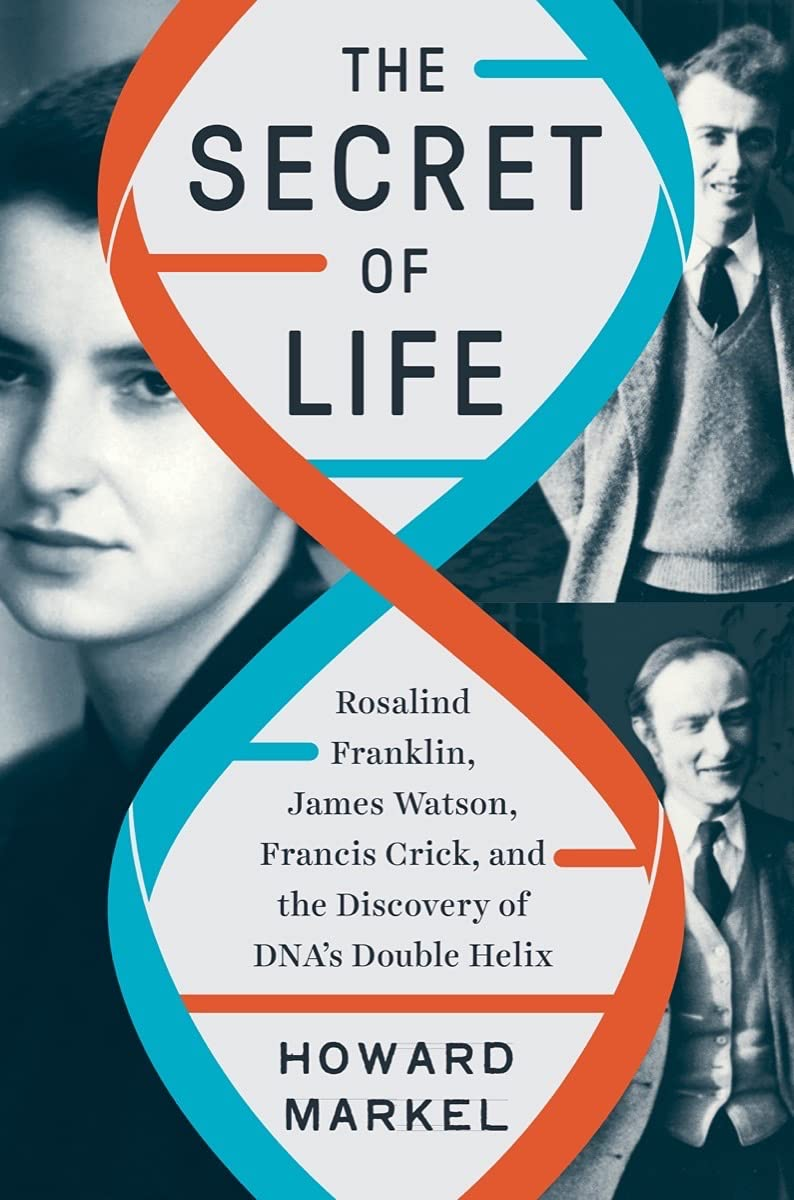 It’s been a minute since someone has recounted at length, in a book, the story of the solving of the double helix structure of DNA. Matthew Cobb’s Life’s Greatest Secret, which focuses on the genetic code, does a fine job. There’s Robert Olby’s Francis Crick: Hunter of Life’s Secrets (2009). Brenda Maddox’s superb Rosalind Franklin: The Dark Lady of DNA (2002) gave Rosalind Franklin the full, serious treatment she deserved. Horace Judson’s The Eighth Day of Creation (1979, 1996) is a bit dated, but it remains a  masterpiece. In contrast, The Secret of Life, the latest book by Howard Markel, purports to be a dramatically new reading of the history, but ain’t. Its central claim is that Watson, Crick, Wilkins, and almost everyone else involved, however peripherally, in the double helix story, formed a literal conspiracy against Rosalind Franklin.

In my review of it, in the Los Angeles Review of Books, I argue that Markel’s flatulent book is, in a perverse way, the opposite of the feminist critique it represents itself as being. It’s disappointing that no other reviews that I’ve seen have picked up on how phony, sloppy, pompous, and self-aggrandizing this book is, in both tone and argument. Do people even read the books they review anymore?

Here’s the first section of my review— head over to LARB for the whole thing:

“WE HAVE FOUND the secret of life!” Francis Crick’s exclamation may be the best-known Eureka! moment in modern science. On February 28, 1953, Crick’s partner James Watson tells us in The Double Helix (1968), “Francis winged into the Eagle,” their Cambridge University lunchtime spot, and announced to all within earshot that they had solved the structure of DNA — the double helix. Crick’s words have become iconic. The Eagle has embedded the line in its very bricks and mortar. It can be found in books of history, science, philosophy, new-age self-help, business self-help, nutritional self-help, religion and spirituality, addiction memoirs, and in books for children. The event is common knowledge.

But if science teaches us anything, it is that common knowledge is neither. Crick went to his grave denying that he said it. And in 2016, at a symposium honoring the centennial of Crick’s birth, Watson admitted that he made it up. (The historian Matthew Cobb was there and wrote about it.) Indeed, it is Watson’s phrase, not Crick’s. Beginning with The Double Helix, Watson spent the rest of his career both promoting and staking claim to DNA. His other books include A Passion for DNA, DNA: The Story of the Genetic Revolution, and DNA: The Secret of Life.

The fact that The Secret of Life, a new accounting of the double helix tale by the historian of medicine Howard Markel, uses Watson’s fictional quotation for a title captures the book’s strangeness, the wobble in its gyroscope. Markel knows the scene is invented, yet he gives the line pride of place. Compiling prior accounts, archival sources, and interviews, Markel seeks to weave into the master narrative the ways that the tweedy, smoke-filled male world of 1950s British science shaped one of the most important discoveries in biology. There is no question that this needs to be done. Social networks certainly played a role in the double helix. Watson, who arrived in Cambridge an eccentric 23-year-old from the Midwest, fell in love with Cantabrigian intellectual life and the British aristocracy. He ingratiated himself into the top levels of the old boys’ network, cannily using it to learn what he thought of as the “secret of the gene.” An even-handed, dispassionate excavation of how the networks operated would be an important contribution to the history of biology.

But Markel makes a more radical argument. Watson, he maintains, was the ringleader in a vast male conspiracy against Rosalind Franklin, the brilliant crystallographer whose data, unbeknownst to her, were crucial to the solving of the structure. Essentially all of the men around her, Markel argues, colluded to short-circuit her career, drive her out of the double helix race, and deny her credit for the discovery. Markel’s argument fails for a peculiar reason: not because he misstates Franklin’s treatment (although at times he does), but because for all his gallantry, Franklin remains overshadowed. The world he creates on the page is just as simplistic and male-dominated as the one he seeks to replace.