Here it is, 2014, and we have “Is the will to work out genetically determined?,” by Bruce Grierson in Pacific Standard (“The Science of Society”).

The story’s protagonist is a skinny, twitchy mouse named Dean who lives in a cage in a mouse colony at UC Riverside. Dean runs on his exercise wheel incessantly—up to 31 km per night. He is the product of a breeding experiment by the biologist Ted Garland, who selected mice for the tendency to run on a wheel for 70 generations. Garland speculates that Dean is physically addicted to running—that he gets a dopamine surge that he just can’t get enough of. 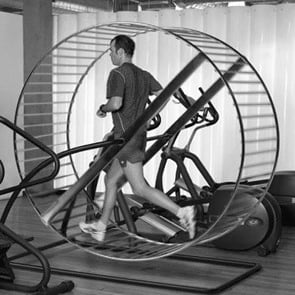 Addiction theory long ago embraced the idea that behaviors such as exercise, eating, or gambling may have similar effects on the brain as dependence-forming drugs such as heroin or cocaine. I have no beef with that, beyond irritation at the tenuous link between a running captive mouse to a human junkie. What’s troubling here is the genetic determinism. My argument is about language, but it’s more than a linguistic quibble; there are significant social implications to the ways we talk and write about science. Science has the most cultural authority of any enterprise today—certainly more than the humanities or arts!. How we talk about it shapes society. Reducing a complex behavior to a single gene gives us blinders: it tends to turn social problems into molecular ones. As I’ve said before, molecular problems tend to have molecular solutions. The focus on genes and brain “wiring” tends to suggest pharmaceutical therapies.

File this question under “Where there’s a cause, there’s a cure.” If scientists crack the genetic code for intrinsic motivation to exercise, then its biochemical signature can, in theory, be synthesized. Why not a pill that would make us want to work out?

I have bigger genes to fry than to quibble over the misuse of “cracking the genetic code,” although it may be indicative of a naiveté about genetics that allows Grierson to swallow Garland’s suggestion about an exercise pill. Grierson continues, quoting Garland,

“One always hates to recommend yet another medication for a substantial fraction of the population,” says Garland, “but Jesus, look at how many people are already on antidepressants. Who’s to say it wouldn’t be a good thing?”

I am. First, Jesus, look at how many people are already on anti-depressants! The fact that we already over-prescribe anti-depressants, anxiolytics, ADHD drugs, statins, steroids, and antibiotics does not constitute an argument for over-prescribing yet another drug. “Bartender, another drink!” “Sir, haven’t you already had too much?” “Y’know, yer right—better make it two.”

Then, what if it doesn’t work as intended? Anatomizing our constitution into “traits” such as the desire to work out is bound to have other effects. Let’s assume Dean is just like a human as far as the presumptive workout gene is concerned. Dean is skinny and twitchy and wants to do nothing but run. Is it because he “wants to exercise” or is it because he is a neurotic mess and he takes out his anxiety on his wheel? Lots of mice in little cages run incessantly—Dean just does it more than most. His impulse to run is connected to myriad variables, genes, brain nuclei, and the reported results say nothing about mechanisms. We now know that the physiological environment influences the genes as much as the genes influence physiological environment. The reductionist logic of genetic determinism, though, promotes thinking in terms of a unidirectional flow of causation, from the “lowest” levels to the “highest.” The more we learn about gene action, the less valid that seems to become as an a priori assumption. The antiquated “master molecule” idea still permeates both science and science writing.

Further, when you try to dissect temperament into discrete behaviors this way, and design drugs that target those behaviors, side effects are sure to be massive. Jesus, look at all those anti-depressants, which decrease libido. Would this workout pill make us neurotic, anxious, jittery? Would we become depressed if we became injured or otherwise missed our workouts? Would it make us want to work out or would it make us want to take up smoking or snort heroin? In the logic of modern pharmacy, the obvious answer to side effects is…more drugs: anti-depressants, anxiolytics, anti-psychotics, etc. A workout pill, then, would mainly benefit the pharmaceutical industry. When a scientist makes a leap from a running mouse to a workout pill, he is floating a business plan, not a healthcare regimen.

And finally, what if it does work as intended? It would be a detriment to society, because, having a pill, it would remove yet another dimension of a healthy lifestyle from the realm of self-discipline, autonomy, and social well-being. It becomes another argument against rebuilding walkable neighborhoods and promoting public transportation and commuting by bicycle. A quarter-mile stroll to an exercise addict would be like a quarter-pill of codeine for a heroin junkie—unsatisfying. Not only is this putative workout pill a long, long stretch and rife with pitfalls, it is not even something worth aspiring to.

And that’s just one article. Scientific American recently ran a piece about how people who lack the “gene for underarm odor” (ABCC11) still buy deodorant (couldn’t possibly have anything to do with culture, could it?). Then there was their jaw-dropping “Jewish gene for intelligence,” which Sci Am had already taken down by the time it appeared in my Google Alert. I’d love to have heard the chewing out someone received for that bone-headed headline. Why do these articles keep appearing?

The best science writers understand and even write about how to avoid determinist language. In 2010, Ed Yong wrote an excellent analysis of how, in the 1990s, the monoamine oxidase A (MAOA) gene became mis- and oversold as “the warrior gene.” What’s wrong with a little harmless sensationalism? Plenty, says Yong. First, catchy names like “warrior gene” are bound to be misleading. They are ways of grabbing the audience, not describing the science, so they oversimplify and distort in a lazy effort to connect with a scientifically unsophisticated audience. Second, there is no such thing as a “gene for” anything interesting. Nature and nurture are inextricable. Third, slangy, catchy phrases like “warrior gene” reinforce stereotypes. The warrior gene was quickly linked to the Maori population of New Zealand. Made sense: “everyone knows” the Maoris are “war-like.” Problem was, the preliminary data didn’t hold up. In The Unnatural Nature of Science, the developmental biologist Lewis Wolpert observed that the essence of science is its ability to show how misleading “common sense” can be. Yet that is an ideal; scientists can be just as pedestrian and banal as the rest of us. Finally, Yong points out that genes do not dictate behavior. They are not mechanical switches that turn complex traits on and off. As sophisticated as modern genomics is, too many of us haven’t moved beyond the simplistic Mendelism that enabled the distinguished psychiatrist Henry H. Goddard to postulate—based on reams of data collected over many years —a single recessive gene for “feeblemindedness.” The best method in the world can’t overcome deeply entrenched preconception. As another fine science writer, David Dobbs, pithily put it in 2010, “Enough with the ‘slut gene’ already…genes ain’t traits.”

As knowledge wends from the lab bench to the public eyeball, genetic determinism seeps in at every stage. In my experience, most scientists working today have at least a reasonably sophisticated understanding of the relationship between genes and behavior. But all too often, sensationalism and increasingly greed induce them to oversell their work, boiling complex behaviors down to single genes and waving their arms about potential therapies. Then, public relations people at universities and research labs are in the business of promoting science, so when writing press releases they strive for hooks that will catch the notice of journalists. The two best hooks in biomedicine, of course, are health and wealth. The journalists, in turn, seek the largest viewership they can, which leads the less scrupulous or less talented to reach for cheap and easy metaphors. And even though many deterministic headlines cap articles that do portray the complexity of gene action, the lay reader is going to take away the message, “It’s all in my genes.”

Genetic determinism, then, is not monocausal. It has many sources, including sensationalism, ambition, poor practice, and the eternal wish for simple solutions to complex problems. Science and journalism are united by a drive toward making the complex simple. That impulse is what makes skillful practioners in either field so impressive. But in clumsier hands, the simple becomes simplistic, and I would argue that this risk is multiplied in journalism about science. Science writing is the delicate art of simplifying the complexity of efforts to simplify nature. This is where the tools of history become complementary to those of science and science journalism. Scientists and science writers strive to take the complex and make it simple. Historians take the deceptively simple and make it complicated. If science and science journalism make maps of the territory, historians are there to move back to the territory, in all its richness—to set the map back in its context.

Studying genetics and popularization over the last century or so has led me to the surprising conclusion that genetic oversell is independent of genetic knowledge. We see the same sorts of articles in 2014 as we saw in 1914. Neither gene mapping nor cloning nor high-throughput sequencing; neither cytogenetics nor pleiotropy nor DNA modification; neither the eugenics movement nor the XYY controversy nor the debacles of early gene therapy—in short, neither methods, nor concepts, nor social lessons—seem to make much of a dent in our preference for simplistic explanations and easy solutions.

Maybe we’re just wired for it.