John Belmont has asked a question that deserves a separate post. This is necessarily brief and should not be mistaken for a general survey of this concept, but the concept is so general that it deserves a somewhat fuller answer than I can (or should) give in the comments. Here is John’s question:

Can you discuss Savelescu’s Procreative Beneficence in the context of these new genetic screening technologies? (Screening that then often triggers definitive diagnostic testing)
It seems normal for parents to desire healthy offspring. Is it evil or morally suspect for a couple to choose healthy offspring?

In 2001, Julian Savulescu advanced a principle he calls “procreative beneficence,” which states that “couples (or single reproducers) should select the child, of the possible children they could have, who is expected to have the best life, or at least as good a life as the others, based on the relevant, available information.” It is of that species of ethical principles called “intuitive”: on the face of it, who could argue on behalf of not providing the best possible conditions for one’s child, whether they be environmental or genetic? So no, of course it’s not evil to choose healthy offspring, so long as one is morally okay with disposing of “unfit” embryos or young fetuses. But its morality is less straightforward.

Savulescu’s idea has spawned a sizable secondary literature, especially among bioethicists, most of whom have tried various tacks to destroy his principle. A full discussion and evaluation of this literature is more than I can undertake here, but i’ll provide a starter bibliography at the bottom.

Few–including Savulescu himself–deny that PB is an element of the “new eugenics.” By this is meant an “individualized” or “liberalized” (or even “commercialized”) eugenics, rather than a state-controlled eugenics. This distinction is entirely appropriate. State-controlled eugenics is part of a specific historical context, whereas I see eugenics as a trans-historical principle (what I have more colloquially called an “impulse”). The eugenic impulse goes beyond notions of “old” or “new” eugenics: eugenics is just there, manifesting in different ways in different periods. Empirically, we appear to be driven to take control of our own evolution.

On the surface, Savulescu’s principle, like arguments in favor of “new” eugenics generally, appears not to be concerned with control over human evolution. It refers only to choices about specific individuals—a couple’s (or individual’s) choices about the genome of an embryo or fetus, it doesn’t concern the well-being of the population. However, <a href=”http://www.ncbi.nlm.nih.gov/pubmed/20047587″ target=”_blank”>Elster</a> shows that procreative beneficence is impossible to fully separate from “General Procreative Beneficence”–the idea that “couples ought to select children in view of maximizing the overall expected value in the world, not just the welfare of their future child.” Most literature advocating the new eugenics treats the individual and the population as wholly distinct, yet of course what is a population but a collection of individuals? These two principles–concern for the individual and concern for the population– are by no means mutually exclusive; indeed, the thrust of my book is that they have always coexisted. It’s naive (or cynical) to act as though one can be separated from the other.

Under this view, PB is in fact an indirect means of directing the evolution of the population. My position is that state control is not what makes a practice eugenic. What makes a reproductive practice eugenic is whether it includes a decision about the welfare of the population; whether it is subject to social (including economic) pressures. If one is “merely” choosing the “best” possible child, few of us have the luxury of ignoring racial features, for example. The “best” child is the best in a particular or anticipated environment. The literature on PB that I have read does not take this fully into account.

If the “best” environment is truly adapting, shifting, and local, then we have Darwinian conditions, in which the population is “evolving itself” with no particular end. This is morally less troubling than a Spencerian goal-directedness. I make no claim to being a moral philosopher, but as a historian, it seems morally less responsible to deny parents that freedom than to allow it. In sum, I am not persuaded by moral arguments against PB.

What if it doesn’t work? We can tinker with genomes long before we understand them, the way one can learn a few Unix commands without fully comprehending the operating system. I worry we will make bad choices. I worry we will uncouple biological systems that have evolved together for millennia. I worry that our technology outstrips our wisdom.

What if it does? I worry that corporate control–via market pressures, advertising, and so forth–may prove even more potent than government control. I worry that PB will instantiate in our very DNA ideas of normalcy that may transcend local conditions and become general principles of human perfection. I worry that it will encourage the idea that genes are all; that we can simply “dial in” the child we want; that we will rob poorly funded social programs to pay for already amply funded research programs for the elite. Historical examples do not provide a comforting set of models for human behavior in these areas.

In short, then, it may not be “evil” to choose the genetic constitution of a child, but in doing so we are making many more choices than we are aware of.

Some references on procreative beneficence:

Here’s the cover art for my book!
This is also logged on the Science of Human Perfection page in the title bar. 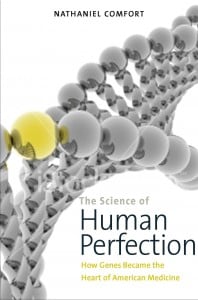